Denver Newsroom, Mar 5, 2021 / 05:27 pm MT (CNA).- Department of Defense investigators have identified the remains of U.S. Army chaplain and Servant of God Fr. Emil Kapaun among the unknown Korean War soldiers buried in a Hawaiian cemetery, much to the surprise and joy of the priest’s relatives and devotees in his home state of Kansas.

“I just hope everybody is as elated as we are. It’s awesome to know that Fr. Kapaun will be coming home after 70 years,” Fr. John Hotze of the Diocese of Wichita told CNA March 5.

Ray Kapaun, the priest’s nephew, reflected on the news.

“There’s no words that can explain what the feelings are right now,” he said, according to KWCH News.

“I know there’s been a lot of miracles that have been attributed to him, or are in the investigation of being attributed to him, but I think everyone sees this as a miracle,” Ray said. “Because this is so unexpected. I mean, my family, we never thought we’d see this in our lifetime.”

The priest had been a chaplain during the Second World War and became known for his service in the Korean War with the U.S. Army’s Eighth Cavalry regiment. After he was taken prisoner, he served and ministered to other soldiers in a prison camp, where he died May 23, 1951.

The U.S. Defense POW/MIA Accounting Agency has determined that the priest’s remains were among unidentified soldiers buried at the National Cemetery of the Pacific in Hawaii, the Wichita diocese said March 4. Many soldiers’ remains had been moved there from North Korea in the 1950s and again in the 1990s.

“It was a joyful and exciting surprise for the Diocese of Wichita that Fr. Kapaun’s mortal remains were recovered after so many years and we continue to look forward to his process of canonization in the future,” said the bishop.

Kapaun’s surviving family is helping to plan the transport of his remains and his final resting place.

Father Hotze, who serves as the episcopal delegate for Kapaun’s beatification cause, said the news of the identification of the priest’s remains was “easily one of the last things I expected.”

“We’ve always hoped that his remains would be found. It is something that has been on the back burner for everybody for so long. It is great news,” he said.

He reported that the chaplain’s cause for Catholic sainthood is in “a waiting phase” due to delays related to the coronavirus pandemic.

In 1993, Kapaun was named a “Servant of God,” the first step on the way to being declared a saint. To be declared “venerable” is the second step in the canonization process. A key meeting regarding his case had been scheduled at the Congregation for the Causes of Saints in March 2020, but that meeting was postponed due to the arrival of the coronavirus pandemic in Italy.

Hotze had high praise for the army chaplain, describing him as “an ordinary person who was able to do extraordinary things in service to his fellow men and women and ultimately that meant in service to God.”

“And that’s how he gave his life,” he said. “He truly followed the example of Christ. You can see Christ’s life, passion and death all rolled up into Fr. Kapaun.”

Kapaun was born in Pilsen, Kansas in 1916. He came of age during the Great Depression. He was ordained a priest in 1940 and began ministry as a parish priest in his hometown.

During World War II Kapaun would offer the sacraments at the nearby Harrington Army Air Field until he became a full-time army chaplain in 1944. He was stationed in India and Burma for the duration of the war. There, he ministered to soldiers and served his unit with a selfless attitude.

He also gained a reputation for courage. After Kapaun’s jeep had been damaged, he would often ride his bicycle to meet soldiers even at the front lines. He would follow the sound of gunshots to find them.

After World War II ended, Kapaun studied history and education at the Catholic University of America. He returned home for a brief time as pastor of his boyhood parish and served at several other parishes. In 1948, the United States issued a call for military chaplains to return to service. Kapaun responded. He was then sent to Texas, Washington, and Japan before deployment to Korea.

During the Battle of Unsan in November 1950, Kapaun worked tirelessly to comfort the suffering and retrieve the wounded from the battlefield. One of the soldiers he retrieved was a wounded Chinese soldier, who helped him negotiate a surrender after he was surrounded by enemy troops. Kapaun was taken captive as a prisoner of war.

Even then, he helped others. Kapaun carried a wounded American prisoner who could not walk some 30 miles to a prison camp, though the soldier weighed 20 pounds more than the priest. The man could have been killed by enemy soldiers if he could not keep up with the march.

The priest was taken to prison camp number five in Pyoktong, a bombed-out village that served as a detainment center. The soldiers at the camp were severely mistreated and suffered from malnourishment, dysentery, and a lack of warm clothing to counter an extremely cold winter. Kapaun would do all he could for the soldiers. He would wash their soiled clothes, retrieve fresh water, and attend to their wounds.

The priest helped his fellow prisoners solve problems and keep up morale. He would stay up at night to write letters home on behalf of wounded soldiers. Many returned prisoners of war said his efforts helped them to survive in a harsh winter. For those who did not survive, the priest helped to bury their corpses.

Fr. Kapaun would celebrate the sacraments for his fellow prisoners, hear their confessions, and say Mass. On Easter Sunday 1951, about two months before his death, he held a sunrise service for prisoners.

When he developed pneumonia and a blood clot in his leg, the chaplain was denied medical treatment, which led to his death.

For his bravery at Unsan, Kapaun was posthumously bestowed the Congressional Medal of Honor in a 2013 ceremony under President Barack Obama. The medal is the United States’ highest military award for bravery.

While the priest’s body was believed to have been buried in a mass grave on the Yalu River near the North Korea-China border, this was not the case. Instead, his remains had been returned to the U.S. in the 1950s along with hundreds of other unidentified soldiers, Hotze told CNA. He believes inquiry into his possible canonization led to information that Hotze helped lead to the identification of the chaplain’s remains.

“He was buried elsewhere in the prison camp,” said Hotze. “His remains were actually returned to the U.S. right after the Korean War, around 1954.”

A set of remains had initially been mislabeled as Fr. Kapaun’s, but investigators determined they instead belonged to a younger man in his late teens or early 20s, rather than to a 35-year-old priest. Further identification was difficult, in part to a lack of technology.

“He was interred at the national cemetery, as were many others, as an unknown soldier,” Hotze said. “Fortunately, the Department of Defense still actively tries to identify the remains of these unknown soldiers.”

Those involved in Kapaun’s canonization cause were told it could be a matter of time to identify his remains if they were indeed at the cemetery.

Every June pilgrims march from Wichita to Kapaun’s hometown of Pilsen. They make the 60-mile walk in commemoration of the priest and his march to the prison camps.

U.S. Sen. Jerry Moran, R-Kansas, who had introduced legislation to award Kapaun the Medal of Honor, also commented on the identification of the priest’s remains.

“I am glad that his family has finally been granted closure after Father Kapaun’s selfless service to our nation,” said Moran, according to the Wichita Eagle newspaper. 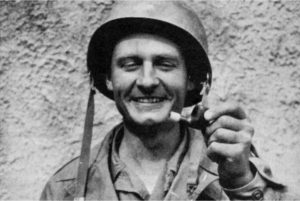