Gayne was born to parents Russell and Agnes Maloney in Rhinelander, WI. He was named after a popular radio personality at the time of his birth.  His family moved to Dayton, Minnesota where he grew up and went to school at Dayton School # 39 where his father was the principal and mother a teacher. Following elementary school, Gayne went to and graduated from Elk River High School in 1945 where he excelled in sports primarily football, basketball, and baseball. In 2012 he was elected to and enshrined in the Elk River High School Hall of Fame for his athletic exploits. Following High School, Gayne enrolled at St Thomas College.

Shortly afterward, Gayne enlisted in the US Army where he served as a Chaplain’s Assistant in post war Berlin, Germany. Following his service, Gayne went to work at Honeywell where he worked for 38 years as a supervisor in the manufacturing and assembly departments. He supervised as many as 85 people in this role.

In 1947, Gayne met Francis Blahut. They were married in 1948 and during their 53 years of marriage, they raised four children while living in Fridley, Minnesota

Gayne joined the Knights of Columbus in the 1960’s during which time he served in several leadership roles with the local and state council. He was elected State Deputy of Minnesota in 1975 and served in that role for 2 years. In the 1980’s Gayne was elected to the Board of Directors of the Knights of Columbus. During this time, he and his wife traveled on behalf of the Knights throughout the US and Europe. He concluded his term as a Director in the 1990’s, turning his energies to his local KC council 4381 and his parish Immaculate Conception.

Francis preceded him in death in 2000. Following Francis’ death, Gayne met Joan Domenic who herself was recently widowed. They were married in 2001 and continue to reside in Fridley. In early 2020, Gayne was diagnosed with early onset dementia. He and his wife Joan moved to St Theresa Senior Living Community where he died peacefully on October 8.

Visitation will be at Washburn-McReady Mortuary in Columbia Heights on Monday October 12 from 4 PM to 7 PM concluding with a rosary. Funeral Mass will be held at Immaculate Conception Catholic Church on Tuesday October 13 at 11:00 AM. Rite of Committal with military honors will be at Fort Snelling Cemetery later in the month. 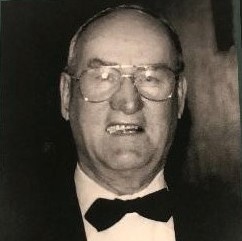