As early as the 1920’s, the Knights of Columbus of Minnesota began making plans to erect a monument to Father Louis Hennepin.  Father Hennepin named St. Anthony Falls during his exploratory and missionary journeys on the North American continent in the late 17th century.

A statue was cast in Geislengen, Germany and erected facing the falls of St. Anthony on a triangular plot of ground in front of the Basilica of St. Mary on Sunday, October 12, 1930.  This was two hundred and fifty years after Father Hennepin made his visit to the falls.

Many dignitaries both civic and church were on hand at the dedication.  Among them were Bishop Francis C. Kelly of Oklahoma City, Archbishop Sinnot of Winnipeg, the Governor of Minnesota, the Mayors of Minneapolis and St. Paul and state and local officers of the Knights of Columbus. 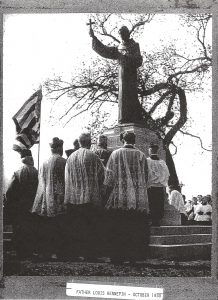 After half of a century the site needed to be restored, so new walks, two granite benches, lights and sprinklers and sod were provided.  A three foot matching granite block was also set in place.  This raised the statue so that the back ground view would be the open sky rather than the freeway which was built nearby during the intervening fifty years.

Once more the Knights of Columbus have undertaken raising the funds necessary to pay for the restoration and maintenance of the monument site.  The citizens of Minnesota and especially of the city of Minneapolis and the parishioners of the Basilica of St. Mary are the beneficiaries of this fine undertaking by the Knights of Columbus. 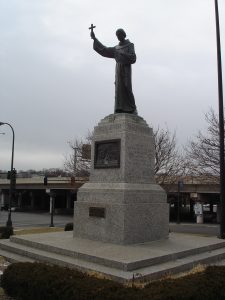 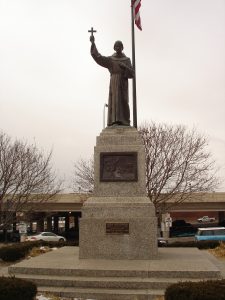 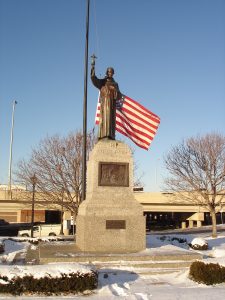 Return to Main 4th Degree Page
Your browser is out-of-date!