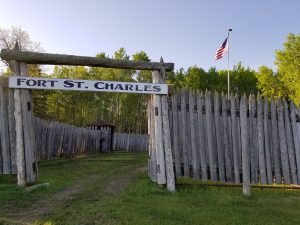 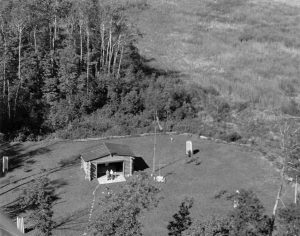 For Minnesota Knights unfamiliar with Fort St Charles, it is a historic site on Magnusson Island at the Northern tip of Minnesota. The original Fort was built in 1732 and was an active trading post until the 1750’s. This was likely the first site for Holy Mass in Minnesota.  In 1949, the 4th degree Knights of Minnesota took on a project to mark and maintain the site. In the 1951, an alter was built followed by a chapel in 1955. In the 1960’s, a stockade was constructed along with markers indicating how the original buildings were built. The chapel was replaced in 2018-2019. For more information checkout our website at fortstcharles.com.

Fort St Charles had some challenges in 2020 due to the Canadian border being closed. The fort site had about half the number of visitors as a typical year. We had spring and fall work crews who traveled across the Lake of the Woods by boat. The crews did several small cleanup projects. The crews had planned to construct two new decks and replace two cabin roofs. Both projects have been put on hold until we are able to get a larger crew and equipment to the site by crossing thru Canada. The 14-member board did commit to raising funds to reconstruct the stockade.

Please remind your Priest that the site has three rustic cabins that they can reserve along with three guests. Please contact Jim Andrie at the email address below. Due to the difficulty with border closure, we did not have any priests stay at the cabins in 2020.

I want to thank all the Knights who support this worthy project to preserve our history.

Return to Main 4th Degree Page
Your browser is out-of-date!